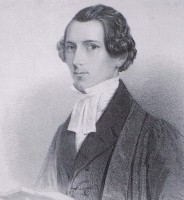 Robert Henry was educated at Shrewsbury School (where Charles Darwin had been a former pupil with whom Robert’s uncle, Thomas Spencer Cobbold corresponded) before going up to Peterhouse, Cambridge in 1839. He had probably learned to row at Shrewsbury, a keen rowing school, as he was selected for the Cambridge Blue Boat in April 1841 beating Oxford by 1 minute and 5 seconds and again in June the following year, this time being defeated by 13 seconds. He was elected President of the Cambridge University Boat Club in October that year but there was no race in 1843.

He took his BA, a double second, in 1843; was ordained Deacon in 1844 and Priest at Norwich in 1845. The next two years included a spell as curate or chaplain at Southwold and at Melton Mowbray. On 10th November 1847 Robert sailed for Shanghai on the Dumfries, a journey which would take over five months. One of his fellow missionaries was William Russell, later Bishop Russell, after whom his first son was named. Having arrived in Shanghai another voyage was necessary to reach his destination, Ningpo, this being accomplished in the Amelia. At this time the coast around Ningpo was a dangerous place, a hotbed for Cholera and a target for pirates. Robert pursued his work for the Church Missionary Society vigorously but hampered by the twelve months or so that it took to get a reply to a letter.

In 1849 he proposed marriage (by letter, of course) to Caroline Brown whose father was Rector of Hemingstone in Suffolk. Although Caroline accepted enthusiastically his hopes were dashed three days later when her father denied his permission and the CMS refused to fund his intended wife’s passage. After some persuasion Caroline’s father gave his consent but the CMS denied him permission to leave his post whereupon Robert appealed to his own father for help. Robert Knipe responded by gaining the CMS’s permission and agreeing to fund their passages both ways.

He sailed from Ningpo to Hong Kong, leaving on 29th September 1851 for England. His ship met terrible weather and more than once ‘he committed his soul to God’ but being a steam assisted vessel it completed the voyage more quickly than his outward passage. He had been suffering from Malaria for a while and his parents were shocked by his appearance. On 13th April 1852 Robert and Caroline were married and in July they sailed, with two Miss Dyers who they were escorting to China.

Their first child, Robert Russell, in March 1853 and their second, Charles Herbert in 1854 were both born in Ningpo but the harsh conditions took their toll and by 1857 the family had returned on grounds of ill health. Robert took up the living of Field Dalling in Norfolk which was in his father’s patronage but within two years he was moved to the larger parish of Broseley with Linley in Shropshire. After about ten years (during which the congregation was thought to have declined!) the family moved again, but not very far, to Ross which was his final appointment. He became Surrogate and Rural Dean in 1873 and Prebend of Hereford Cathedral in 1885. Active in the community until his death in 1893 he is buried at Ross and commemorated by a window there and by a plaque in Hereford Cathedral.