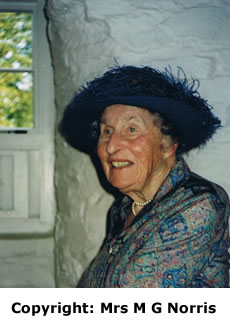 Lady Hilaria Gibbs owed her distinctive Christian name, a continuingly popular choice in her family, to her ancestor, Hilaria de Cotehele, a ward of the Black Prince whose marriage in 1353 brought the medieval manor house Cotehele in southeast Cornwall into the possession of the Edgcumbe family, with whom it remained for almost 600 years.

Lady Hilaria, known as "Laire" to her family and friends, was one of four children of the 6th Earl of Moune Edgcumbe, Kenelm Edgcumbe, who inherited the title from his second cousin in 1944. It was he who arranged in 1947 that Cotehele should become the first historic house to pass to The National Trust in lieu of death duties.
Yet at the end of her long life Lady Hilaria, who knew the property all her life and lived there in 1944 and 1945, had established a strong claim to be a second Hilaria de Cotehele. Even as a centenarian she was a frequent visitor to the house and its estate, regaling visitors with her memories of the house. It was at Cotehele that she celebrated her 100th birthday in 2008 with a lunch party attended by 180 relatives.

She also provided Cotehele and The National Trust with the recipe for its traditional stoneground wholemeal bread; although she was brought up in a family accustomed to liveried servants, she was an excellent breadmaker, and her recipe uses dark brown sugar and molasses to impart a rich, soft crumb.
Cotehele is one of the least altered medieval houses in the country, because from the 16th century the family seat of the Edgcumbes moved to Mount Edgcumbe overlooking Plymouth Sound. Cotehele was retained as the family's country estate, with a tower from which servants could exchange signals with Mount Edgcumbe regarding the family's movements and requirements.

Mount Edgcumbe was wrecked by German incendiary bombs in the air attacks on Plymouth in 1941, but Lady Hilaria's father eventually rebuilt it from 1958 and reoccupied the house in 1961. The mansion was sold to Plymouth City Council and Cornwall County Council in 1971 but was celebrated at Lady Hilaria's 100th birthday party at Cotehele in the shape of a specially commissioned cake, and in the following summer itself became the scene of an even larger celebration, a picnic for 250 family and friends.

Hilaria Agnes Edgcumbe was born in London in 1908. Her father was en electrical engineer with an interest in powering early cars and aircraft: one of her earliest memories was seeing Louis Bleriot take off, powered by one of her father's engines. During the First World War her father's company, Everett Edgcumbe, was involved in providing the seachlights protecting Plymouth, so her childhood was spent at Widey Court, Plymouth, a house in which Charles I held court in 1644 during the siege of Plymouth, and neighbouring Widey Grange.
Her education was the business of governesses until, in 1923, she was sent to finishing school at Vaucresson, west of Paris, with Madamoiselle Roblin, who taught her fluent French, and for whom Lady Hilaria retained a warm appreciation in later life.

Back in England, the young Hilaria decided to teach dancing. In 1933 she married Denis Gibbs, an officer in the Queen's Royal Regiment, and she accompanied him on prewar postings to Italy, Portsmouth, the Isle of Wight and Ireland.
Her brother Piers, who it had been assumed was to inherit the Mount Edgcumbe title, died at Dunkirk. Denis Gibbs was captured at the battle of El Alamein and for two years his wife, with their three young daughters, did not know whether he was still alive. But after the Italian surrender in 1943 Gibbs was able to flee his Italian prison and walk the length of the Apennines through German-occupied Italy, arriving home in time to join in the D-Day landings in 1944.

After victory Lieutenant-Colonel Gibbs was sent as commanding officer on the Isle of Man, where he and Lady Hilaria welcomed an official visit by George VI and Queen Elizabeth. The Queen is said to have asked Lady Hilaria: "How many children do you have?" Lady Hilaria told her and, in an aberrent moment, inquired politely:"And how many have you got?"
Lady Hilaria was, though, a model army wife while her husband was commanding officer of Officer Cadet Training Units at Mons House, Aldershot, and Eton Hall in Cheshire, and of the battalion stationed in Singapore. She also gained a reputation as a fierce tutor in Scottish reels. "Who's that bossy little woman in the green dress?", someone asked at a party. "Oh, do you mean my mother?" said one of Lady Hilaria's daughters.

Family was of foremost importance to her, and she overcame all crises in a spirit of unifying enlightenment. Two of her daughters divorced and remarried, but typically Lady Hilaria's response was: "I have four daughters and six sons-in-law."
After Gibbs left the Army the couple ran a successful market gardening business at Roborough House in Devon, before building their retirement home, Aldenham Grange, in Tavistock.

Gibbs died in 1984. For the last eight years of her life Lady Hilaria lived with her youngest daughter in Plymouth, close to Cotehele, Mount Edgcumbe and her childhood Widey homes. Throughout her life she chronicled her experiences and thoughts in flowing rhyming verse, which she modestly dismissed as "doggerel" but which the family now hope to collect and print.
Lady Hilaria is survived by three of her daughters; a fourth daughter predeceased her.