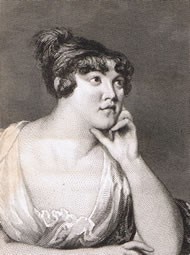 Born in Watling Street, London to Robert Knipe a wealthy merchant and Alice Waller, young Elizabeth published her first work at the age of 18. This was followed 4 years later by six narrative poems dedicated to Sir Joshua Reynolds who she had recently met.

She married William Clarke who was more than twice her age in 1790 but he was dead within 6 months. The following year she married John Cobbold, 25 years her senior and already the father of 15 children, and bore him 6 boys and a girl in the next 8 years of whom 4 boys lived to maturity. With a second wealthy husband, this one a brewer, she vigorously pursued her interest in arts and charity. Holywells quickly became a centre for literature, theatre, music, drawing and painting ; she loved it and joined in with alacrity. Her students were tutored by Gainsborough, Reynolds and Constable.

Mrs. Cobbold continued to publish poems and give encouragement for 20 years. Her "Ode to the Victory of Waterloo" was dedicated to the Prince Regent and the proceeds went to charity. She founded a number of Ipswich charities of which one was to provide clothing for the infant poor. But she partied too. Each year she hosted an extravagant Valentine party at which 80 delicate and elaborately cut Valentines were given to unmarried ladies and gentlemen with only one thought in mind. Her fame spread and Dickens portrayed her as Mrs. Leo Hunter in his Pickwick Papers.

Nor was science forgotten; she exchanged letters with the President of the Linnean Society and even had a fossil shell from the Suffolk coast Nucula Cobboldiae named after her. Admired by all and respected by all she was busy all her life. Taken ill in July she appeared to be recovering when she even died quickly in October 1824.


Note: The Cobbold FHT has a number of Mrs. Cobbold's works including a copy of "Poems" (1825) which was presented to George F Dixon (and carries his initials) by his grandmother Mrs. Henry (Emily) Cobbold on 1st. January 1886 and which contains original vignettes by Mrs. John (Harriet) Cobbold.