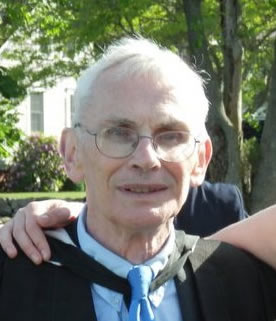 G Bruce Cobbold, as he is known in America, retired last year (2014) after a long and distinguished teaching career in Marion, Massachusets. Here is an account by Matthew Bernat dated 14th July 2014.

Consider that a compliment for the longest-serving faculty member the school has ever had. Cobbold retired this May after teaching Latin and Greek, two classical languages, at the school for 48 years. "I was pondering to stay on for another two years to make it a round figure," he joked. "But I thought, 'no.' " At May's commencement ceremony, Head of School John Quirk praised the 78-year-old Cobbold for being a "friend, intellectual and philosopher." In retirement Cobbold said he plans to continue in those roles.

He's currently translating a poem written 2000 years ago by the Roman philosopher Lucretius. In it, ancient atomic theory is explained and explored. It turns out Lucretius wasn't that far off from modern theory. "It's a very interesting set of suppositions on how the world works," Cobbold said. "His theory is pretty similar to the independent discovery of the atomic theory in the 1700s." While Lucretius believed the world was composed of indestructible atoms, he was eventually proved wrong. "He assumed atoms could not be split which turned out not to be the case," Cobbold said.

His interest in Latin and Greek started when he was a student in England, his home country. He considered studying history or language until a teacher told him the classics provided an education in both fields. Cobbold arrived in the United States in 1964 as part of an exchange program arranged between the private school in England where he taught and Philips Academy Andover. The exchange lasted two years. In the mean time, he met his wife, married her and accepted an offer at Tabor Academy. In Marion, the couple met halfway, geographically speaking. The town is situated about midway between Cobbold's native England and his wife's hometown of San Francisco. "I've always been sympathetic to trans-Atlantic marriages," he said.

Cobbold started teaching at Tabor in 1966. Through the years he's seen Tabor undergo many changes, but the school avoided Vietnam era unrest that swept other campuses. "We weathered the 60s and the 70s," he said. "It was very strange. Everyone else got caught up in the rebellions and the occupations. I don't know what it was. Maybe the headmaster then had a firmer grip on the proceedings than I thought he had." Throughout his career, Cobbold has been both a faculty member and an administrator. He started as a teacher then served as Director of Studies for 15 years.

In 2001, Cobbold was the interim Head of School. That year proved to be one of the most trying times for the school and the country. "One of my most memorable moments is a day I can't remember at all," he said, adding that the events of 9/11 occurred during his first week as headmaster. "I know I had to haul everybody in and address the parents who were dropping their kids off. Everyone was anxious and wondering if they should take their kids home or not," he said. "I think I persuaded them that Marion is safer than most places." Soon after, he left his administrative duties behind and finished as a classroom teacher for the last 15 years of his career. Cobbold said he returned for the student interaction. "I was always brought up to believe that teaching is the job where you're guaranteed a good laugh everyday, which is certainly true," he said.

Cobbold is looking forward to possibly tutoring, volunteering or becoming involved in the Marion Arts Centre. He also wants to paint, a hobby he dropped many years ago. But if there's one thing he's learned from his years as a teacher, it's that you never know what students will remember. "What I've discovered since I've retired is the students don't forget what you say to them," he said. "I learned too late that you should always be on your guard because you never know. Something you say totally casually might stick with them forever."