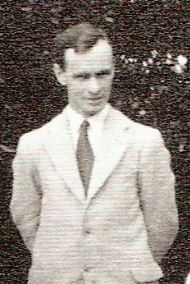 Awarded MBE in Birthday Honours 1969 at RNCD. Went to Eaton Hall when BRNC was evacuated there 1943-46.(They lived in Chester while there).

Geoff died on 16th March 1983. A memorial Service was held in the Chapel at BRNC, Dartmouth on 6th May 1983. He was buried at the Church of the Holy Cross, Binsted, Hampshire.

To-day we remember with gratitude the life of Geoffrey Francis Cobbold. After school at Marlborough Geoffrey went to Caius College, Cambridge where his father was before him and his elder son, Bruce followed him. "Cobb" as he was affectionately known in the College joined the staff here as a mathematician in January 1931 and retired in December 1971 having served the Navy faithfully for 41 years. Many of the not so bright cadets will always be grateful to him for his patience and his understanding approach to their problems. One of them, the present Governor of Gibraltar, who was in "Cobb's" Maths class and not all that brilliant in the subject, relates with wry humour how when he was Captain of the College he visited "Cobb's" class. "Good morning Cobbold" he said, "have you any problems here?". With a slight smile Geoffrey replied "Yes Sir, plenty, but none that you could solve".

He was an understanding and conscientious Tutor, always willing to listen to and to help with the problems of a cadet's life.
For 25 years he was responsible for one of the most taxing of jobs, the compiling of the termly time table. As far as I can remember it was almost unheard of for any amendment having to be made over all those years. He was Editor of the Britannia Magazine for some 17 years maintaining it at a very high standard. His dearest hobby was Drama, as actor and producer, both in the College and with the Dartmouth Players. He and his wife Betty were prime movers in restarting the Players after the last war. He and I served together for some four years in the Home Guard of which he was a most able member, being our expert in the complicated workings of the temperamental Lewis Machine Gun.

But where I most vividly remember him is on the Rugger field - small, light but as tough as they come - falling and tackling without a thought for the consequences - just as in life he never spared himself. A man of undoubted moral courage and decided opinions, he had no patience with the easy way out. We who know him so well never heard him speak unkindly of others, rather did he look for the good in them.

During the latter years his love of gardening, especially his roses, and of his two beloved cats helped in some way to compensate for increasing deafness. He was unobtrusively immensely proud of his family - Bruce in America, Susan in the Welsh Office in London and Richard in the Navy. Betty and Bruce, Susan and Richard and all his friends miss him sorely, but he would not wish us to mourn but rather to rejoice in the happy and proud memories he has left us. This is a Thanksgiving Service for one who was faithful in his life carrying out happily and successfully the place that was allotted to him. The following prayer so typifies Geoffrey's daily life that I would like to read it to you.
"The day returns and brings us the petty round of irritating concerns and duties. Help us to play the man, help us to perform them with laughter and kind faces, let cheerfulness abound with industry. Give us to go blithely on our business all this day. Bring us to our resting beds weary and content and undishonoured and grant us in the end the gift of sleep. Amen".