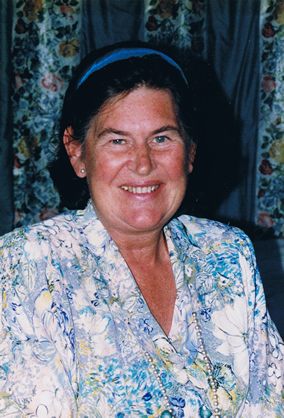 Tribute by Anthony at her funeral on 28th January 1994
"Jillianne Bridget, the latter after her Aunt, Miss Bridget Gibbs, who lost her life only a few weeks ago while on a walking tour abroad, were the two charming names given to the little daughter of Lieut. and Mrs Denis Gibbs when she was christened at St. John the baptist Church, Aldenham on Sunday August 18th". Thus spoke the Hertfordshire Advertiser in 1935.

Jill was born on 11th July and her baby album in which I found this cutting gives almost prophetic insight into the nature and being of that noble and compassionate personality which has brought us together today. The infinite care and adoration with which the album was assembled by Jill's mother is our first clue. Jill was brought up from the very start in an atmosphere where love and love alone dominated. But the mundane was not omitted - the album records that she was first bethed by her mother on July 30th. It seems this was a somewhat less than satisfactory event because the following entry tells us that Nanny resigned two days later.

At a year she is recorded as "talks all day in her own language" (and I suspect that the more earthly amongst us may feel that that continued into later life). Other entries introduce her love of animals, her passion for flowers growing in the garden and her very early spiritual nature. At 2 years 2 months the record tells us "her sister Margaret was born - Jill loved her immediately". All these good characteristics developed in Jill through school whe she also showed the more usual leadership and sports skills in addition to aptitude for for drama and writing. She might have chosen a career in either of these but she knew she had more to offer the world through people and she determined to include children as part of that gift. Jill's four children are all here today and I want you to know that their contribution to their mother's welfare over her last few weeks was beyond measure.

For me (and maybe for others too), Jill's greatest gift was that she taught me to know my feelings, to understand my feelings and to express those feelings. Always she knew that we had to learn to know ourselves before we could know others. Jull taught this lesson (though I may not yet have learned it completely) by example rather than by instruction and, as one who has been a pretty dedicated member of the stiff upper lip brigade, I would not have been able to talk to you today as I am now without her prior help.

I have cried buckets since Jill died but I feel no shame. I may not have finished crying yet but they are good tears because they are tears that Jill unlocked for me. Those tears are a testament to Jill's touch and if she is watching I know she will be pleased. She had so many qualities that were I to attempt to list them all I would quickly bore you. But please let me mention a few and I shall be surprised if there are not at least one or two which ring a familiar bell with each of you.

Jill ruled by love, not by authority
She always looked for and usually found good in every situation
She always made time to stop and to listen
A seeker seldom went away without wise counsel

But do not be deluded by such eulogistic commendation - she enquired deeply, built robust convictions and was a formidable debating adversary. Throughout, however, ran a bubbly stream of sympathy and a great understanding of human frailties.
Nobody knows this and feels it more keenly than my 3 sons and me. She quietly and affectionately oversaw our integration into the extended family which has given us such joy and which is now my salvation.

She took my 3 redundancies as mere molehills of life and when we lost nearly everything at the beginning of the recession, she saw it as no more than a style in the fence of experience. I know not what I did to deserve 20 years of her infinite love and grace!

But still I have to wrestle with the question as to why such a good life as hers should be so roughly curtailed. I can only think she was needed somewhere else more than she was needed here, In the vernacular, I think Jill got a promotion. She knew through her vision at Burswood that she would be asked to make this sacrifice and in a sense she looked forward to it. She had no fear of the future - she was just scared of the transition in which her increasingly troublesome body had to be discarded. She bore that pain and fright with amazing fortitude; she suffered almost silently and died with the greatest dignity.
Difficult though it is for us all to part with a love that...
...we have enjoyed so much...
...that has touched so many...
...and from which we have benefited so greatly...We have to learn to let go.

Letters about Jill - and there have been many - always talk of her wisdom, her inner strength, her outer calm and her willingness to listen. From reading them I know she touched many, many lives and touched them tenderly. One such letter seemed to say it all so succinctly that I want to read it to you.

Dearest, dearest Jill,
Your nice little letter card has just arrived, though you actually wrote it just after Margy's visit. You were pretty ill then but now I understand you are much worse. Dear Jill, I'm so sorry. And that is such an understatement I hardly dare say it - but there are no words for such big things. Only prayers.
I think it was Ella Fitzgerald who said, "Life's a party which we join after its already begun and leave before it's over". Well, you are one of the loveliest, warmest, most precious guests at this party and it aint at all fair that you should leave it before the rest of us because it won't be ths same without you. But, my word, I'm glad you came. Lots and lots and lots of love....
She loved that letter and showed it to all of us with great pride the day before she died.

Jill's greatest, greatest pleasure was the time she spent with close friends and kindred spirits on the Island of Iona. Those visits were a welcome source of sanctury, renewal and inspiration. Whilst there she wrote a little meditation which I want to read to you. I have called it LET GO and so great is my admiration for its writer that I can think of no better conclusion to this, my tribute, than Jill's own words and thoughts.

Meditation: LET GO
Find your own space;
A rock somewhere, high up, facing the sea.
Feel it's rough firmness and warmth from the sun,
See the wild flowers nestling in grass and crevice.
Listen to the bleating lambs below you
And the sound of seabirds around you.
Let your heart move with the wind and rythm of the sea,
Know, deep within, that it is good.
Feel the springy turf beneath your feet,
Sense, deep down, the Iona heartbeat.
Draw on her green earth energy; up, up
Through the earth, through the soles of your feet,
Towards your heart let it flow;
Slowly - penetratingly.
Lift up your eyes to the singing skylark
And feel the warm sunshine on your face.
Become aware of infinity.
Draw down those golden rays; down through your head
To centre in the heart,
Slowly, penetratingly feel the power as it moves.
When gold meets green within the heart
They merge to blues of changing hues,
Like sky reflecting in the ocean.
Move with the blue waters of your heart;
Expand - heal - transform.
Give away a gift of love and let go.