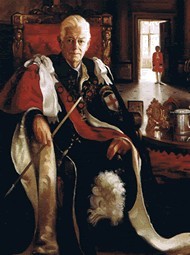 Lord Cobbold, who has died aged 83, was the last Lord Chamberlain to have the thankless task of censoring stage plays and the first Governor of the Bank of England to appear on television. An astute financier of formidable appearance, "Kim" Cobbold was well suited to the dignity of the Governorship -- in the words of one of his juniors: "He was always the Governor, even when shaving and wearing nothing but his pyjama trousers".

He was Governor from 1949 to 1961 -- a stint longer than any other save that of Montagu Norman, who recruited Cobbold to the Bank in the early 1930s and set him on his road to the succession by appointing him an executive director at the age of only 33. Cobbold was the Governor who put his stamp on the newly-nationalised Bank of England -- a nationalisation he had negotiated with the Treasury -- and though a Labour Chancellor called the Bank "my creature" it was no one's creature for as long as Cobbold ruled it.

His relations with Whitehall had a banker's confidentiality; leaders of the City could come to him in quiet and security. His time as Governor saw the end of the direct economic controls inherited from wartime, and the opening of the City's markets -- a mixed blessing, for the Bank then made a convenient scapegoat.

After an inquiry into Labour allegations that there had been a leak of the intention to raise Bank Rate in 1957 (which proved groundless), Cobbold lifted the veil that had previously hidden the Bank's activities. Interviewed in his parlour by Robin Day on ITV's Tell the People in 1958, the Governor compared the Bank's relationship with the Goverment to that of a good wife: it offered its advice freely and had been known to nag if the advice was not accepted.

CENSORSHIP DUTIES. Appointed Lord Chamberlain of the Queen's Household in 1963, Lord Cobbold made no secret of the fact that he shared the theatrical profession's distaste for his censorship duties. Following a series of 'causes celebres', the Lord Chamberlain's powers over the stage were finally abolished in 1968. The next day saw the opening of Hair, the American "tribal love-rock musical".

The Lord Chamberlain's many other responsibilities -- from Court ceremonial to the care of the Queen's swans -- were tackled by Lord Cobbold with singular efficiency. He instituted a study of organisation and method at Buckingham Palace and did much to improve the pay and conditions of those in the Household. In 1971, the year he retired as Lord Chamberlain, Lord Cobbold was one of the key figures to be examined by the Select Committee on the Civil List, urging that the Queen's expenses should be index-linked.

Cameron Fromanteel Cobbold, a scion of the Suffolk brewing family, was born in 1904 and educated at Eton and King's College, Cambridge. He quickly made his mark in the City and was managing the Milan subsidiary of a British insurance company when Montagu Norman persuaded him to join the Bank of England.

At the Bank and in the Royal Household his demands on others for meticulous attention to duty were always more than justified by his own example. He was never lavish with praise, but when it came it had been justly earned and was worth having. Lord Cobbold chaired the Malaysia Commission of Enquiry in 1962 and held numerous directorships, including BP and the Hudson Bay Co. He was one of the Lieutenants for the City of London, a Deputy Lieutenant for Herts and a Fellow of Eton.

Cobbold met his future wife, Lady Hermione Lytton, while staying with her father, the 2nd Earl of Lytton, then Governor of Bengal, during a big game hunting expedition to India in 1925. They married in 1930, and Lady Hermione inherited the historic family seat of Knebworth, Herts, upon the death of her father in 1947. Lord Cobbold is survived by his wife, their daughter (an elder daughter died as a child), and two sons -- the elder of whom, David Lytton Cobbold, the present proprietor of Knebworth, born in 1937, now succeeds to the peerage.