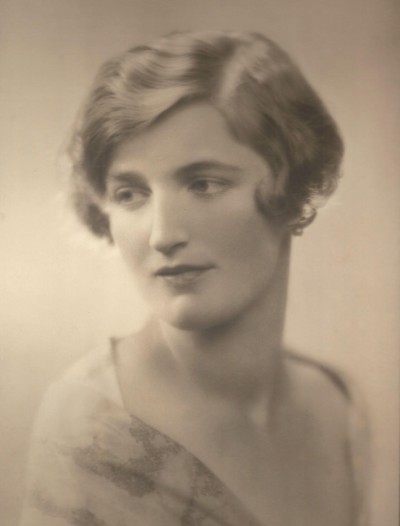 This biography is an abridged version of an excellent article by Jane Dismore entitled "Pamela Hambro and the lost world of Milton Abbey" which was published in the December 2009 edition of Dorset Life.

Throwing back her fair head and laughing delightedly, she would be thrilled to know that a vital part of a Dorset village, in the area where she spent the last days of her tragically short life, bears her name, and she would be flattered to be associated with something so useful. Providing an important service to a busy community, the Pamela Hambro Hall in Winterborne Strickland is a lasting memorial to a woman who should have become mistress of the great Milton Abbey estate near Blandford alongside her husband, Charles Hambro. Instead, she lived just long enough to learn that it was lost to them forever. Now a boys' boarding school (attended by her great-grandson), until 1932 Milton Abbey itself was a magnificent private house. It was owned, when Pamela married Charles in October 1919, by his grandfather, the merchant banker and philanthropist, Sir Everard Hambro.

Pamela was no stranger to wealth herself. Born in January 1900 into the Suffolk brewing dynasty, the Cobbolds, she was the youngest child of a union between trade and title. Her mother, Lady Evelyn, nee Murray, was an Anglo-Scottish aristocrat whose ancestral homes included Blair Castle in Fifeshire and Holkham Hall in Norfolk.
John Dupuis Cobbold may have been trade, but he was wealthy and in marrying him, Lady Evelyn acquired the financial security she otherwise lacked. Besides, John's was hardly new money; his family had been successful brewers since the 1740s and had developed other lucrative businesses, too. They were also MPs, mayors and generous benefactors in Suffolk, for which they are still acknowledged today.

Pamela was raised on her father's lavish Ipswich estate, Holy Wells, and spent the summers shooting at his hunting estate at Rannoch in the Highlands, but she was no spoilt brat. The Cobbolds had a long-established reputation for public service and, like John, Pamela could communicate with people at all levels of life. While she was very sociable and had a mischievous sense of humour, she hated pointless parties, much preferring to be with a few close friends or outdoors on her horse or her motorbike, shouting into the wind as she rode.

It was these characteristics that so attracted her friend and later husband, Charles Hambro. Over six feet tall, handsome and kind, he was a war hero by 1917, winning the Military Cross aged 19. Introduced to Pamela by his friend and her brother, Ivan, when they were at Eton, Charles implored her to write to him when he was sent to the Western Front. Their letters, written between 1917 and 1919, are a poignant, funny and vibrant account of their lives during and immediately after the Great War; they contrast her life in 'stagnant Ipswich', as she called it, and his as a lonely young officer at the Front, coping with the ghastliness of war and its aftermath.

To the delight of both families, Pamela accepted Charles's proposal in May 1919, when she was 19 and he 21. In early June he took her to Milton Abbey, where both sets of parents attended for the formal announcement of the engagement. Everyone who met Pamela liked her and Charles's grandfather was no exception. Pamela loved Milton, as so many did, including Everard's friend, the late King Edward VII, who had considered it as a residence before he discovered Sandringham.

Although Pamela and Charles's expectation of Milton was some way in the future, it did not prevent Charles, who had spent many happy childhood days there, pointing out that it was important she should get to know it: 'Because one day you will have to boss Milton...You Darling, how they will all love you!'
Meanwhile the couple settled into married life in Kent and in London, where Charles undertook his banking training which would lead to his becoming Chairman of Hambros Bank and Deputy Governor of the Bank of England. Pamela developed friendships with literary and political figures of the time and became interested in Buddhism - newly gaining popularity in Britain - yet contrarily still loved to hunt.

It was partly hunting that brought her, Charles and, by 1931, their four young children to Dorset during that year. Charles's father, Eric had inherited Milton Abbey as intended, becoming Chairman of Hambros Bank at the same time. Charles, Pamela and their children moved into the lovely Delcombe Manor on the estate so that Pamela could hunt, probably with the Portman Hunt. Always a generous man, Eric loved exotic travel and unfortunately he was also a keen but not very successful gambler. The reality was that the estate could not sustain the financial burden Eric had put upon it, which was exacerbated by the Depression, and to the family's great sorrow they concluded in late 1931 that the beautiful 8000-acre estate, which Charles's great-grandfather, Carl, had thought would stay in the family for ever, had to be sold.

In December 1931 Pamela was kicked by one of her hunters and developed septicaemia. Shortly afterwards, when attending a Dorset hunt ball with Charles, she caught a cold which, with her resistance lowered, rapidly turned to pneumonia. She was confined to bed in Delcombe Manor. Their daughters were aged eleven, ten and six and their son, Charlie - later Lord Hambro - just 21 months. In April 1932, while Pamela weakened, they were in quarantine for whooping cough. The last time the girls saw their mother alive was by climbing a ladder to look through her bedroom window, but Charlie was too young and never saw her again. She died on 16th April 1932, aged 32.
Her funeral took place in Milton Abbey itself, her two favourite hunters being brought to the church door. Her body was then taken by car to her favourite spot on a hillside above Loch Rannoch in Perthshire, where she and Charles - later knighted, although she would never know - had spent their honeymoon. In Milton Abbey a plaque commemorates her.

The sale of the Milton Abbey estate was concluded in late 1932. Charles and his uncle, Angus Hambro, bought some lots, thus maintaining the family link with Dorset. In 1934 Charles built the memorial hall for Winterborne Strickland to replace its Reading Room, which had been sold off with the rest of the estate. He later gave it to the community on three conditions, mainly that it bear his late wife's name forever. Pamela's connection with Dorset may have been brief during her lifetime but it is everlasting in death.