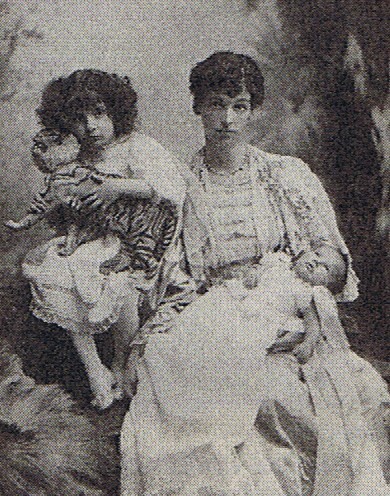 Lady Evelyn had already been a Muslim for some years when she became the first British woman to make the pilgrimage to Mecca. This she did in April 1933 at the age of 66. The account of her journey was published in her 'Pilgrimage to Mecca' the following year and has since been re-published under the same title.

As a child she spent the winter months in a Moorish villa on a hill outside Algiers where her parents went for the sunshine. She learned Arabic, visited mosques and on her own admission 'was a little Muslim at heart'. Whilst she has not identified the moment of conversion she recalled a visit to the Pope in Rome during which she declared that as her faith.

Her parents the Earl and Countess of Dunmore kept a house at Bab-el-Look on the outskirts of Cairo from which she was married to John Dupuis Cobbold on 23rd April 1891 at All Saints' Church, Cairo. There followed a big party at Holywells a month later to welcome the couple home. Lady Evelyn was an adventurous traveller as well as a keen sportswoman and published in 1912 her account of her most recent expedition 'Wayfarers in the Libyan Desert'.

Sadly she and her husband split up but the Glencarron Estate which was purchased for Lady Evelyn gave her the opportunity to indulge her sporting interests. She stalked stags in it's wide open spaces and ruled with a rod of iron. She may have felt somewhat liberated by the death of John Dupuis in 1929 as it was then she started to plan for the Hajj.

Having completed this challenge, essential to every devout Muslim, she left home the next year with her grandson Toby Sladen to cross Europe, the Mediterranean and fly down the Nile to Kenya. What she terms her diary was published the following year (1935) as 'Kenya the Land of Illusion'. This illustrious old lady loved Glencarron, she loved her stags and she loved her garden. Following a fall in her London home in which she broke a leg she asked to be moved to Scotland. She completed her wonderfully full and extraordinary life at the age of 95. Her final request 'to be buried where the stags will run over my grave' was granted. She lies at Glenuaig on the Glencarron Estate.

Lady Evelyn outlived her husband and her 3 children.

Note: The Cobbold FHT has copies of Lady Evelyn's three books. One is signed by the Author and one was donated and inscribed by her great grandson.