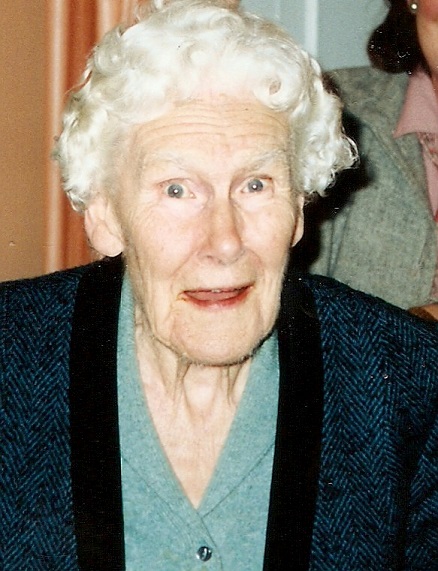 Joyce went to a Caius May Ball (in the same party as Geoff and Betty # 409/10) at about the time they became engaged, with Michael Cobbold (Alfred Michael Gordon #403). He was a good bit older than her and she found him very boring! Outside the family Joyce was always known as Cobby.

In January 1936 during a visit to her cousins, Mac and Duffie Robertson (#928/9) in Bulawayo, Joyce became engaged to Jocelyn Coghill Cramer of the Native Affairs Department, S Rhodesia. They planned to marry at Joyce's home, Farlingaye Hall, Woodbridge in April 1937 but the engagement was called off. Her scrap book at around this time indicates that she had a Bull Terrier called Farlingaye Frolic which did well in local shows.

In July 1981 Joyce was awarded the Advanced Grade in Solo Verse Speaking which was followed in July 1984 by Silver Award (Distinction) in reading awarded by the New Era Academy of Drama and Music.