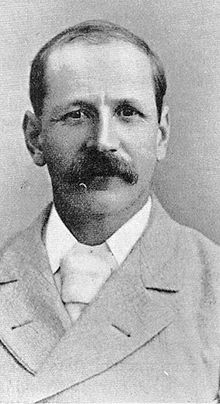 William Nevill (Nuts) Cobbold (1863-1922) is described on the FA web-site as "the Michael Owen of his day". Vic Wayling, Founder-Curator of the Football Museum says "W N Cobbold was one of the pioneers of the game, he was also a Corinthian and England international forward of the 1880s"

He was born on 4th February 1863 at Long Melford in Suffolk, third son of Rev. Edward Augustus Cobbold (born 1825) and Matilda Smith.

He started playing for the local club in Long Melford, went on to play for Charterhouse (1880-1882) and was Rustat Scholar at Jesus College, Cambridge (BA 1885; MA 1889) gaining his first football Blue in 1883, playing for Cambridge against Oxford for the next three years and as Captain in 1885 and 1886. He won nine caps for England (four of them against Scotland) from 1887 onwards.

Obituaries may be given to eulogistic commendation but even making allowances for that the accounts of his football prowess were seriously remarkable.

"Cobbold was often styled the Prince of Dribblers. We have never seen his equal as a forward of pace and of skill in control of his ball in every imaginable condition of the game, from the fast ground on the glorious Godalming heights to the slough on the old Leamington ground, Blackburn, where we once saw him playing for England against Scotland; it was in 1887. Cobbold usually played inside left and in Internationals his partner outside was as a rule the ever famous E.C.Bambridge. In full cry he would trap the swiftest of passes without check of stride; as the ball reached his toes up would go his arms like the sails of a windmill, and he would easily dribble past the backs. And then we would see those crashing shots at long or short range; he could shoot equally well with either foot."

In 'The Annals of the Corinthian Football Club' C.B.Fry says of him "As a dribbler we have never seen his equal. He had a peculiar shuffling run; just a wriggle between the halves, and a wonderful knack of shooting at quite unexpected moments and impossible angles."

Vic Wayling recalls "Cobbold in those days was team skipper, and this job then carried the additional task of selector. So that he might have a better opportunity of watching the England trialists in action one day, he elected to play in goal. After a short while he grew tired at the lack of scoring so much that after stopping one attack, he took the ball with him, beating one man after another, to eventually dribble the ball into the back of the opposing net for a goal."

As if that wasn't enough he was a County cricketer (Kent and Cambridgeshire) and was formerly President of Lawn Tennis at Cambridge.