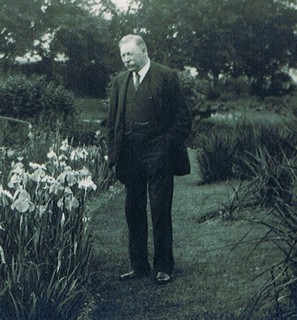 He was educated at Cranbrook School, Kent but left at 17 to go and work for National Provincial Bank. Later he founded A H COBBOLD & Co, stockbrokers of Southampton. He became a director of British American Land Company in 1911 and lived at Brownhill House, Nursling, Southampton (bought in 1896) a large Victorian villa with a field which he turned into a magnificent water garden, fed by Fearnings Brook. The gardens included a lake and a weir.
When he died this obituary appeared in the Romsey Parish Magazine;
" In Mr Cobbold of Brownhill we have lost from our midst a great lover of the Abbey and its services. All who knew him would agree that a genius for friendship was one of his marked characteristics. It was a great delight to him to have his friends round him in the beautiful garden he made and so loved.
Very wide indeed is the circle that feels the poorer for his loss and will miss the kindly smile and singularly charming voice. I have a little packet of letters he elected to write from time to time to express his appreciation of, or thanks for Services or Sermons or the different re-orderings of the Abbey. It was just characteristic of him, a busy man, to stop to do this, and part of that courteous kindness that made him a friend to everybody and everybody's friend. He was a man of marked business ability, and all through his life gave ungrudgingly to the Church, wise and valuable service"

There is a memorial to A H Cobbold and his wife Ellen in Rownhams Church.
Brownhill House was built in 1867 on land purchased in 1864 by Herbert C Wilkins. Augustus Hills (sometimes known as Hilly) and Ellen had two children and five grandchildren born in the house. Their daughter Sylvia inherited the house and sold it in 1937. After a period of private ownership it was bought by Hampshire County Council in 1953 and opened as a Care Home in 1954. Extensions were added in 1969 and 2004 but it closed in 2015 and was demolished for new houses in 2019.
Our thanks go to Steven Painton who worked in the Care Home and saved a number of items including 100 year old floor tiles for the Trust archive.