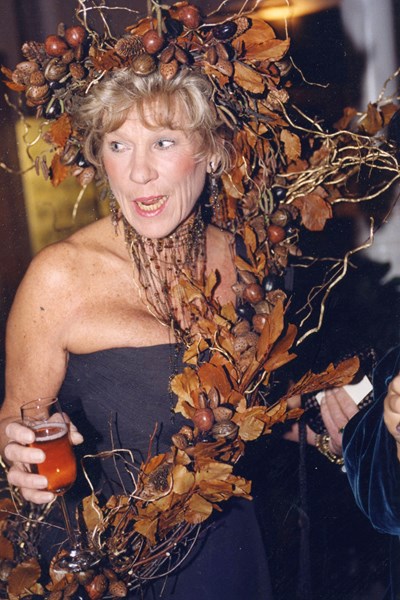 Lady Hambro, who has died aged 83, was the widow of the banker and Tory grandee Lord Hambro, and before that an actress, model and television announcer, a fearless pilot in Tiger Moths and the first, trailblazing fashion editor of the new Telegraph magazine in the 1960s. She was the middle of three daughters of Sir John Huggins, the governor of Jamaica from 1943 to 1951.
Noel Coward once sat at the piano at King's House, the governor's residence, and made up a song about her. It began: "Now Little Cherry Huggins was a glamorous soubrette / And everyone adored her from the vicar to the vet. / She seemed to try with eagerness to pass her school exam. / But everybody realised she didn't give a damn."
Cherry inherited her mother's blonde hair, good looks and drive: Jocelyn Stevens, publisher of Queen magazine, nicknamed her "the Bulldozer". From Roedean she went to Rada, where she won the Silver Medal and took the professional name Cherry Hunter (because she was always hunting for a job).
She started her first proper job at Vogue in New York and London. She spent her salary on flying lessons at Fairoakes Aero Club in Surrey, gaining a pilot's licence at the age of 22, an achievement which, along with her colourful personal life brought her to the attention of newspaper diarists. Her flying career was not without incident. A few days before she got her licence she luckily escaped harm in a car accident - "It was wet, I skidded, the car did a complete somersault, but I wasn't even scratched" she said and then almost crashed her aeroplane whilst taking off on a solo flight.
She nearly married the dashing racing driver Mike Hawthorn, but decided against it, realising that cars would always be his first love. He was killed in 1959 when his Jaguar careered into a tree off the A3 Guildford bypass. Undaunted, she was soon engaged to her flying instructor, the aviation ace Peter Twiss DFC, the first man to fly at more than 1,000mph. Their daughter Miranda was born the following August but the marriage was dissolved not long after.
In the late 1960s she joined John Anstey for the groundbreaking new colour supplement he was to launch and edit, Weekend Telegraph. "Fashion had been so boring after the war" she remembered many years later. "Suddenly women were sexually liberated. We knew what to do with our bodies and we wanted to express our sense of freedom through fashion." Not all fashion editors are stylish in person but Cherry was. And she was serious about fashion. She teamed up with photographer chums like David Bailey, Helmut Newton, Norman Parkinson and Cecil Beaton to shoot bold photo spreads in faraway places. She ran pictures of girls standing on ice bergs in Greenland, or in chiffon evening dresses underwater in the Bahamas, with weights tied to their ankles to sink them to the bottom and blasts of oxygen administered between shots.
At Salvador Dali's house at Cadaques in Spain she photographed his protegee, Amanda Lear, on rocks by the sea, dressed in Balenciaga. The erratic artist decided to pour petrol on the water and set light to it. (We are not told what happened -Ed.). Despite the exoticism of the locations, however, she felt that designs in those days had an essential simplicity. "A dress is a dress," she would say. "In my day they all ended up on the floor at the end of the nigrt anyway."
After 10 years of this she was offered the editorship of Harpers& Queen magazine but she turned it down, because she had decided instead, in 1976, to marry Charles Hambro, later Lord Hambro. Now she threw her energies into shooting parties, travelling and looking after Dixton Manor, Hambro's house in Gloucestershire, where she was said to provide the most delicious dinners in the county.
It was a happy marriage until his death in 2002 and the couple had a wide circle of friends. She pushed her easy-going husband to take up new projects, such as improving the Conservative Party's finances as honorary treasurer.
Cherry Hambro's greatest pleasure was walking her beloved golden retrievers and she will be remembered as someone who spoke her mind, unedited. She is survived by her daughter.