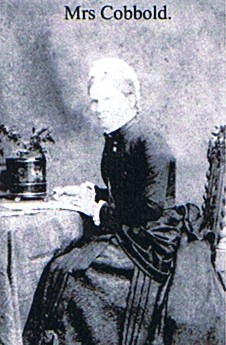 In addition to the various charitable works Mrs Patteson Cobbold started many organisations in Ipswich. There was the Handford Home for mentally deficient children. It was about the year 1897 that Mrs. Cobbold realised the great need of a home for mentally deficient girls, and with the help of a small committee she started a home at Saxted. The applications for admission were soon so numerous that in 1899 the Home was moved to the present premises on the Ranelagh Road. From that time onward Mrs. Cobbold was the president, and her interest and loving sympathy never diminished.

In 1877 Mrs. Cobbold started the Ipswich branch of the Girls' Friendly Society, and when in 1881 the Norwich Diocesan Council was formed she became a member. In 1886 she was appointed head of the department for sick members and Homes of Rest, which position she held until 1894. In the same year Mrs. Cobbold retired from the presidency of the Ipswich branch, which she had held since its formation. Mrs. Cobbold always took the very keenest interest in the movement, and did all she could to support and encourage it.

In conjunction with Mrs. R.S. Paul, Mrs Cobbold started the Ipswich branch of the Brabazon Scheme for employment in the workhouse. Until 1903 she was the Treasurer, and she remained on the Committee and never forgot, even when she was ill, to patronise the sales. Another organisation Mrs. Cobbold started was the Ipswich Branch of the Mothers' Union in 1891, and she remained its president until a few years ago.


An Appreciation published at the time of her funeral.

All who had known Mrs. Cobbold will certainly acknowledge that her most striking characteristic was the unfailing sympathy she had for and with the young, the old, and the helpless. This was chiefly shown by the many schemes she originated and supported for their welfare; schemes which were always well thought out, put on a practical foundation, and ably conducted.

The simplest suggestion for further improvements, the slightest chance of providing pleasure and extra enjoyment, the smallest detail for the comfort of those concerned in these schemes, was very carefully considered and carried out quietly and un- ostentatiously and with the greatest liberality.

Her personal influence was great; she had a keen insight into human nature, a ready wit and sense of humour, which aided her in carrying out plans, often in advance of her time, and considered unnecessary by many of her contemporaries; but she had no hesitation in backing her own opinion.

In earlier years she sometimes alarmed people by her outspoken criticisms, but in later life one never heard anything but kindly encouragement, wise counsel, and practical advice. Few people spoke so well as she on the public platform. What she said was short, concise, and to the point; and in a more private way addresses were always earnest and helpful. Those who have been privileged to receive letters from her know how peculiarly pithy and conversational they were, and how they always urged one to do or say the thing desired.

Her love of nature was wonderful; she seemed to find beauty in the dullest of surroundings, and to make others see it too She had the power of calling out the best in everybody and everything.

In addition to all that is written above, the Trust understands that she was a great force in the fight against the Smallpox epidemic of 1872. She is also recorded as a member and exhibitor at the Ipswich Fine Art Club between 1899 and 1915.