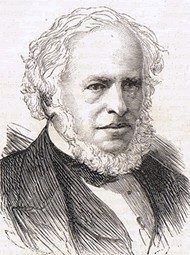 The blend of Cobbold genes from his father and Chevallier from his mother produced a man of gigantic energy for Victorian Ipswich. It seems there was almost nothing happening in Ipswich, maybe even Suffolk in which he was not involved. The Chevalliers, originally from Jersey, lived at Aspall, can trace their line back to Edward I and later gave their name to a new strain of fine malting Barley.

John Chevallier Cobbold was born in Ipswich on 24th August 1797 and baptised at St. Clements the same week. Educated at Bury St. Edmunds Grammar School (admitted 1807) he grew up with all the benefits and privileges of a family engaged in profitable business. He was to inherit much but he also gave much back in civic service. He was a Dock Commissioner (1837), Mayor of Ipswich (1841), Treasurer of the Ipswich and E. Suffolk Hospital, MP for Ipswich from 1847 to 1868 being elected five times consecutively. Contemporary comment records that there was never any doubt who spoke for Ipswich. He was a JP and a Deputy Lieutenant for the county of Suffolk.

On the commercial front where no doubt an element of enlightened self-interest prevailed he was Chairman of the Eastern Union Railway throughout the life of the company and a director of the Ipswich and Bury St. Edmunds Railway. His company had it's own wharf and shipbuilding yard. Between 1820 and 1865 more than 20 ships of up to 350 tons were acquired for regular trading with India and China. It was John Chevallier Cobbold who kick-started the development of Felixstowe. He bought land there including Felixstowe Cottage, which stayed in the family for many years, and built the first hotel.

In marrying Lucy Patteson at Wortham in 1827 he forged a link with a highly respected Norfolk family. Lucy's brother was Sir John Patteson a judge of the Queens Bench and she was aunt to John Coleridge Patteson the martyred Bishop of Melanesia.

They had 13 children, 3 of which followed their father to the House of Commons and most of which achieved considerable success. John Chevallier Cobbold's final recognition came with his appointment as High Steward of Ipswich in 1875, a position he held until his death at Holywells on 6th October 1882 at the age of 85.
In St Bartholemew's Church, Ipswich there is a marble font inscribed "To the Glory of God and in memory of John Chevallier and Lucy Cobbold, this font is given by their Grandchildren"

Note: The Cobbold FHT has copies of 2 books and 2 CDs which detail John Chevallier Cobbold's significant influence on railway development in East Anglia.