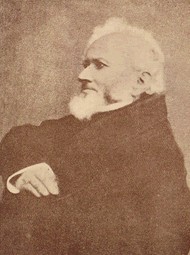 of The Cliff, Ipswich.

The Ipswich Journal wrote on Saturday February 18th 1860 as follows:

Only a fortnight since we recorded the deaths in one week of two of the oldest and most respected of our townsmen, we have this week the melancholy duty of adding another name to the list -John Cobbold Esq., of Holywells, and the father of our esteemed member, John Chevallier Cobbold Esq. The deceased gentleman was one of the oldest inhabitants of this his native town, with which he has been associated the whole of his life, extending over the long period of 86 years. He was much respected by all classes and always took a great interest in the welfare of the town, and the shipping interest connected with it.

In early life Mr Cobbold carried a very large brewery at Eye. He was also a most useful member of the Corporation of that town, and was highly esteemed by every one. On the death of his father, he took possession of the business at Ipswich, which he carried on until the time of his death. He was a member of the well-known banking firm of Bacon, Cobbold & Co., and was also by far the largest merchant and ship-owner in the district, his transactions in the Corn, Coal and Malt trades being very extensive. He carried on, at the same time, one of the largest breweries out of London, as well as a considerable business in the Wine and Spirit trades. Besides these he was the owner and occupier of several large farms, brickyards etc. - the number of persons employed in the whole of these immense businesses amounting to several hundreds.

As a far-seeing and shrewd man of business few could compete with Mr Cobbold, and although he lived to so great an age, he was, up to the period of a few weeks preceding his death, the life and soul of his large establishment. As a kind and liberal employer he gained the esteem of all associated with him, and the poor have also lost in him a warm-hearted benefactor. Mr Cobbold was a sound Conservative in politics, but he never took a very active part in either Parliamentary or Municipal contests. He was, however, a member of the Corporation for many years, and his great knowledge of mercantile affairs, together with the interest he ever evinced in the prosperity of the port, were of great service to the town.

Mr Cobbold's health had been failing him for some time, but he was only confined to his house for a few weeks before his death, which took place on Sunday last. The leading inhabitants of the town expressed a desire to show some mark of respect at the funeral, which is to take place this day, but we understand that the family, anxious, as far as possible, to carry out the wishes of the deceased, who was remarkable for his unostentatious manner, have intimated a desire that no public demonstrations should take place."