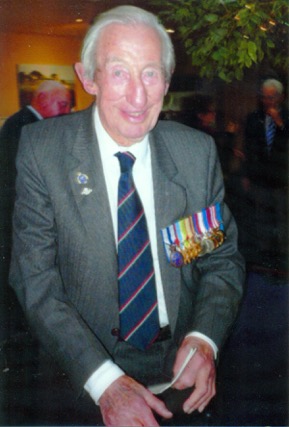 John Gregson won the George Cross for saving the life of a shipmate during a torpedo attack in the Mediterranean in 1942. Gregson was serving as an apprentice on the 'Deucalion', a merchant vessel of 7,500 tons. The ship was one of a convoy of 14 that left Gibraltar an August 10th 1942 with the object of breaking through to the beleaguered island fortress of Malta with much needed food and fuel supplies.

But after being attacked by two Heinkel torpedo bombers, the Deucalion was hit on the starboard quarter; one of the holds burst into flames and the order was given to abandon ship. Lifeboats were being lowered and the blaze was spreading rapidly when one of the AA gunners was found pinned down under a raft. Gregson helped to get the gunner free but the man had sustained severe injuries and when it proved impossible to get him into a boat or on to a raft there was no alternative but to drop him overboard. Gregson dived into the sea after him but, in the darkness, he could not find a life boat so he towed him a distance of about 600 yards to a ship which picked them up.

The citation stated: "But for Apprentice Gregson's gallant action undertaken with complete disregard of his own safety, the injured man would have had little chance of survival"

Gregson was invested with the Albert Medal by King George VI at Buckingham Palace on March 30th 1943. In 1971 when the Albert Medal was revoked by Royal Warrant Gregson elected to keep the original medal he received from the King, rather than exchange it for the George Cross.
Amongst his other medals, he also held the Lloyds War Medal for Bravery in Saving Life at Sea. This medal was instituted by Lloyds of London in 1940 to be awarded to officers and men of the Merchant Navy and fishing fleets for exceptional gallantry at sea in wartime.