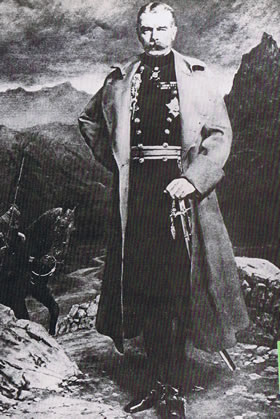 THE GREAT WAR, as contemporaries called it, had been raging for a year and ten months when King George V, on a morning of early June 1916, left London by special train for one of his numerous inspections of troops. Two brigades, totalling 1,300 soldiers and sailors, were drawn up on the landing ground of the Royal Naval Air Station at Felixstowe in Suffolk. Whilst the King was receiving senior officers before mounting his horse, his equerry was called urgently to the telephone. He returned with a grave, shocked face to report to the King, privately, that Lord Kitchener, Secretary of State for War and his staff had been drowned.

They had embarked from Scapa Flow for a short official visit to Russia. HMS Hampshire had been sunk off Orkney in a violent storm 'either by a mine or a torpedo' at about 8 pm the previous evening. The King rode round the troops, took the salute and returned to London in shock and grief. At Buckingham Palace he found a note from Queen Mary, who had left to inspect a hospital at Woolwich: '12.45 June 6. My darling, I am miserable at this dreadful news about dear Ld K, so what must you feel. Such a loss to you & the nation, it is indeed terrible.' That night Queen Mary wrote in her diary: 'Went to G who was dreadfully upset. Stayed some time with him & we saw Sir George Arthur who had been working for Ld K for the last 22 months. Spent a very sad evening.' And the King's comment in his diary highlights their utter sense of loss: 'It is indeed a heavy blow to me & a great loss to the Nation & the Allies. I had every confidence in him & he was a great personal friend.

The news shook the nation to the core. In camps where 'Kitchener's Armies' were training, in the trenches of France and Flanders, especially among those who had answered their country's need in response to his pointing finger in the famous poster, in factories and fields, villages and city offices, men and women felt a personal sense of loss. Not since the death of Queen Victoria had Britain known such national grief.

Some of his Cabinet colleagues were not so sure. They had wanted Kitchener out of the way, though not tragically, either because they had concluded that his faults now outweighed his merits, or because his single minded dedication to winning the war hindered their political ambitions: these wept 'crocodile tears', as one friend put it.

But none felt the loss more deeply than those who had served on his personal staff. Sir William Birdwood ('Birdie'), commanding the Anzac troops on the Western Front, as previously in Gallipoli, wrote at once to Clive Wigram: 'I am simply overwhelmed & feel for the moment that I am left alone in the world. Birdie recalled Kitchener's visit to Gallipoli 'when he showed his pleasure at seeing me again, so very much more than was his usual custom...I was writing to him only last week telling what we thought of the yapping curs in the House of Commons round the old lion.'

Far away in the Sudan, Sir Reginald Wingate, Kitchener's successor as governor-general, who had been with him throughout the reconquest and when setting up a regime of peace and justice which lasted sixty years, wrote from Khartoum: 'We are all dreadfully distressed about Lord Kitchener's loss. Personally I feel it greatly for he was one of my oldest & best friends and we had served more or less together for close on 30 years...The people of the Sudan, who were devoted to him, have sent hundreds of telegrams of sympathy & condolence.'

And in Egypt, where Kitchener had been 'de facto' ruler until the outbreak of war, Lord Edward Cecil described to his wife in England the great memorial service in Cairo where the Christian and Muslim clergy sat together on the dais. 'The effect in the country is extraordinary - everyone really depressed for everyone has lost a true friend.'

Kitchener left an indelible mark on his generation and on British history. Although his posthumous reputation has varied from contempt to high praise, he was by any standard one of the towering personalities of his age. His height and strong build, with his famous moustache, thick brown hair and impressive face, gave Kitchener a somewhat alarming appearance. His eyes were blue, with a slight cast in the left eye which, with a scar from a war wound, enhanced the effect of sterness until he smiled. He was painfully shy and loathed personal publicity and was therefore often misunderstood. His great friend Edward Stanley, Earl of Derby, said that 'to many he was an enigma, and some have likened him to a sphinx...Only those who knew him well really understood him.'