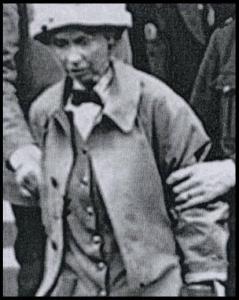 Aged 22, Frances left Waimate, New Zealand to study at Cambridge, paid for by her uncle, Lord Kitchener. By 1908 she had become involved in the women's suffrage movement eventually becoming a prominent leader of the Women's Political and Social Union in Scotland. Imprisoned several times for her role in violent protests and attempts to burn down prominent buildings, including the cottage of Robert Burns - Scotland's national poet - she went on hunger strike in 1912 and in 1914, and was subjected to force-feeding which involved acts of physical abuse and indecent assault. She sometimes used the alias of Janet Arthur and her antics caused her uncle great outrage.

Frances was awarded a medal which came on the market in February 2016. Still in its original case the medal is inscribed 'Presented to Frances Parker by the Women's Social and Political Union in Recognition of a Gallant Action whereby through Endurance to the last Extremity of Hunger and Hardship, a Great Principle of Political Justice was Vindicated.'

Following her death in 1924 Frances left the medal to her friend and co-suffragette Ethel Moorhead in whose family it remianed until auctioned. The purchaser was the Te Papa Museum in New Zealand.