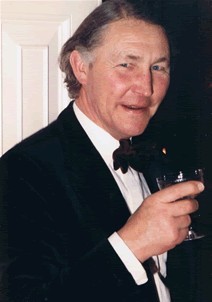 
Having politely declined further medical treatment, Michael died on 7th July 2002, as he had always lived, in full control, with good humour and supported by the love of his family. Thus ended a five year struggle against a rare and complex illness.
He was educated at Marlborough College, where he excelled at all sports…He was called up for National Service in 1949, but after attending OCTU, opted for a career in the Regular Army and was directed to the holding company at Sandhurst. Here he made such a favourable impression that he was commissioned with little or no delay into the Wiltshire Regiment, and soon was in Hong Kong with the 1st. Bn.
On the return to UK of 1 Wilts, in 1953, he variously served as an invigilator at the WOSB, at Eaton Hall as an instructor and lastly became OC the MMG platoon before the Bn. left Warminster for a tour of duty in Cyprus. He met and married Judy shortly before leaving Warminster. In Cyprus, Support Company was employed as the Battalion Reserve and was based at Aghirda Camp close to the pass over the Kyrenia Mountains.
After about eighteen months, Michael applied for secondment to the Army Air Corps. He passed the course with flying colours and was then posted to RAF Idris, Tripolitania, to a detached flight of an AAC Auster Squadron. In 1959 he returned to UK, to take up a post as instructor in flying at RAF Little Rissington. Here ended a varied, happy but short career in the Army.
He entered civilian life intent on enjoying it but also keen to be his own master. He therefore started from scratch a light engineering business, later on become a publisher, and later, still living in Bristol, he launched yet another enterprise; the preservation of ancient buildings. When in 1969 the family estate in Devon was passed to Judy, they moved there and Michael enthusiastically and efficiently managed it and set up a large-scale sheep farm.
He developed many interests and hobbies, notably sailing, gliding and hot-air ballooning to name but a few. He taught sailing at Kelly College but will be remembered with the greatest affection for his unselfish enterprise in setting-up a robust and permanent scheme to enable blind children to enjoy sailing. He has left his younger son David with a flourishing corporate entertainment business, including shooting, archery, carriage-driving and off-road vehicles and moto-cross. Anthony, his brother, also a former officer in the Wiltshire Regiment, is now the business consultant.
On 13th July 2002, at the Parish Church of Sparkwell, a Thanksgiving Service was held for his life. The Church was packed and many listened outside via loudspeakers. Representation from his brother officers could at best be described as marginal; they were mostly in Salisbury, enjoying the officers' luncheon that afternoon at the Wardrobe. There was a certain irony in this that he would have found amusing!
He is greatly missed by Judy, Caroline, Charles and David and their families, and by Anthony.