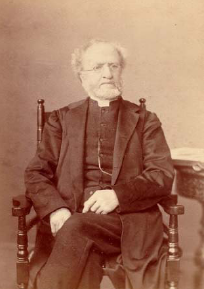 Alfred James Lowth was the youngest of the thirteen children of Rev. Robert Lowth of Chiswick, rector of Hinton Ampner, and Frances (née Harington).

He was the youngest grandchild of Robert Lowth Lord Bishop of London. He attended Eton and Winchester colleges, Oxford University, and earned quite a reputation as a cricketer in his youth. After serving a number of parishes around Hertfordshire, Bedfordshire and Dorset, he settled in Winchester as the vicar of St.Swithuns Upon Kingsgate. Although he never achieved the status of canon or prebendary, he nevertheless became one of the surrogates of the Winchester diocese, a position of some responsibility and trust.

He married Julia Mary Nunn Cobbold, with whom he had a single son, Alfred Charles. He died in February 1907 and is buried in the West Hill cemetery in Winchester.

The following is an extract from the Lowth family archive.
Alfred "Dandy" Lowth played cricket for England. He was a fast bowler, whose action was described as "natural roundarm at the height of the shoulder" and, although a fast bowler, he put a lot of spin on the ball. He was only 5 feet 4 inches and was also known as "Alfred the Little". A letter to The Times in 1919 quoted from the preface to John Wisden's book 'Public School Matches': "Probably the greatest bowler who has ever hailed from Winchester College was A. J. Lowth, who holds the unique record of having represented the Gentlemen of England v The Players at Lord's in 1836 whilst still a boy at school". He played for Oxford for three seasons and made another appearance for the Gentlemen in 1841 but his career ended early due to failing eyesight. Then he became a C of E priest - and married Julia Cobbold.