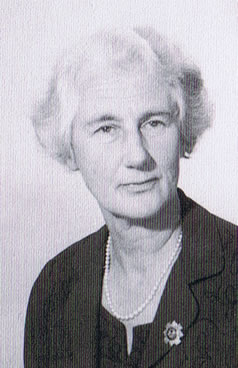 Lady Blanche Cobbold, one of Suffolk's best-loved people and the only woman president of an English League football club, died yesterday afternoon at her home, Glemham Hall.
Last of her generation in the ducal Cavendish family, Lady Blanche would have been 90 next February. "She passed away quietly and naturally", said her son, Mr Patrick Cobbold.
Lady Blanche also leaves two daughters, Mrs Jean Paul and Mrs Pamela Cadogan, six grandchildren and two great-grandchildren.
Her father was Victor Cavendish, ninth Duke of Devonshire, and her mother a daughter of the Marquess of Landsdowne.
He succeeded to the dukedom in 1906 and the family moved from Lancashire to the great Derbyshire estate of Chatsworth, which she left in 1919 as bride of Captain John Cobbold.
Her husband had been badly wounded in France during the 1914-18 War, but stayed in the Army for a while after the armistice before taking his place in the family brewing business.
He founded Ipswich Town as a professional football club in 1938, after being persuaded to go to an Arsenal match instead of spending a day at the races.

Lady Blanche soon picked up her husband's enthusiasm for football, becoming president in 1965, cheering her team to victory in the UEFA Cup final in Amsterdam and continuing to attend matches regularly until two years ago.
In 1944 her husband, by that time a colonel, was killed when a flying bomb hit the Guard's Chapel during a Sunday service.
Only a few months later a similar bomb hit a tree at the bottom of the garden at Glemham Hall and most of its 400 windows were smashed.
Half-a-dozen evacuees from Dagenham were staying there at the time and she remembered how the youngsters quickly armed themselves with brooms and brushes to clear up the glass.
Later she opened the Elizabethan-cored, Georgian-fronted hall to the public, a policy continued by Mr Patrick Cobbold, chairman of the football club to which his parents gave so much.
Lady Blanche had many interests in addition to her family, home and football, and was particularly keen on the arts. She staged occasional festivals and exhibitions at Glemham and was president of Felixstowe Celebrity Concert Society for 20 years until 1973.
Among other organisations she supported as president and in various ways were Young Farmers, Girl Guides, St John Ambulance and Conservative Party. She had also been a magistrate and for seven years Master of the Easton Harriers.
Her sister Dorothy married Harold Macmillan, later Lord Stockton, and she attended the former prime minister's 90th birthday party in 1984.