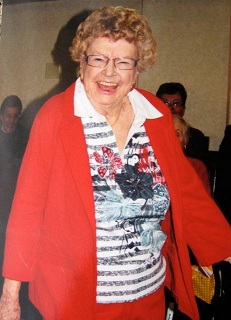 Married Gordon T. Keeler M.A. (U. of Toronto) Aug. 16th. 1941
They lived in various locations during Gordon"s service as Flight Officer and Navigation Instructor in the R.C.A.F. during the war. Afterwards, they moved to Brantford, Ont. As wife of the Headmaster of the local High School, she devoted her time to community Endeavour's e.g./ Chair of United Appeal, Chair of Ontario Home and School Federation, and was a member of YM-YWCA boards in Brantford and Kitchener Ont.
She also hosted an award winning radio and TV programme re; "All aspects of Education" over stations CKPC Brantford and CKOC TV Kitchener.
When her husband was appointed Superintendent of Secondary Schools for Western Ontario by the Ministry of Education, they moved to Waterloo. After their two daughters, Shirley and Barbara were married, she became a real Estate Broker, and for 12 years taught the Real Estate Licensing course at Conestoga College.
Upon retirement, she and her husband, both ardent naturalist, traveled the world to such places as the Amazon, the jungles of Costa Rica, the pyramids at Giza, and even sailed on Junks in Hong Kong harbor. She was widowed in 2002 after 62 years of marriage. Her hobbies include writing short stories, (one book published in 1997), playing bridge, fishing, canoeing, and bird watching. She is still living an active life in her own home in Waterloo, Ont. Canada.

With deep regret I have to advise that much-loved Peg died peacefully on 17th July 2018 in her 100th year. Her sort do not come along very often so, sad though we are, her high-octane life is worthy of great celebration.