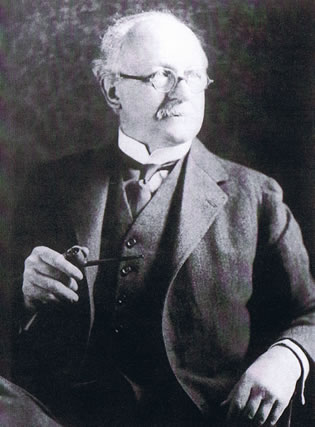 The great English Architect, Sir Edwin Lutyens was the builder of some of our finest country houses and gardens, of New Delhi in India, and creator of countless other monuments and buildings. There is something elusive about the genius of Sir Edwin Lutyens. When he died in 1944 the architectural magazines appeared bearing black borders, as though a king had died. In the years that followed, architects and critics looked away from his work; the Second World War and the rapid reconstruction of Britain brought pragmatism and practicality to the fore and the art of archicecture, of which Lutyens was such a consummate practitioner, was almost forgotten. But the works of Lutyens were always there, and although his reputation was temporarily eclipsed it was always acknowledged and never besmirched. His architectural accomplishments were of such an original and complex nature that they seemed to frighten the over-simple philosophers of the modern movement.
His works demonstrate his genius in the same way as the works of any great painter or sculptor. They spell out his complete mastery of architectural form and record his own struggles to reach a geometric perfection that is above dogma and fashion.