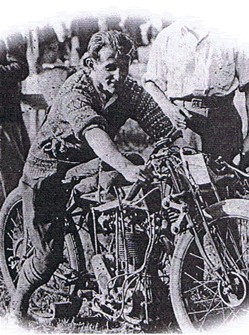 After attending The Grange, Folkstone, Gordon followed his half-brother Felix to Ashburnham House, Westminster School. In his own words, he was a bit of a dunce at School but he excelled on the sports field and the rifle range, winning the Public Schools Cadet Trophy for Shooting in 1920 in partnership with D R 'sniper' Knight. Gordon had to get a bull's eye with his final shot and that is just what he did, to claim the prize for Westminster. He also took part in the Greaze of 1919 in the presence of King George V and Queen Mary who were visiting the school.

He could not remember what first interested him in motorcycling but undoubtedly it was the potential of thrill and speed. Brooklands racetrack had only been opened in 1908, built by Mr. Locke-King in the grounds of his house in Weybridge. It was here that Gordon made a name for himself, winning his first race in 1923 on a long-stroke Sunbeam. For the next six years Brooklands and Sunbeam, for which he became a works rider, became his life.

There were many racing successes, culminating in him being awarded the greatly prized British Motor Cycle Club Gold Star for lapping the circuit at an average speed of 102 mph in a race. In 1927 he also achieved sixteen six- and twelve-hour World Records on the Brooklands banked circuit, riding Sunbeam and Jap machines. He went on to run a dirt track in Paris for six months, with great financial success, so it seems that his French must have improved from his schooldays. In one report it says, 'Twentieth in a class of twenty, very, very weak'. On leaving Paris he, in his own words, 'blew the lot in three weeks in the south of France'. This was, after all, 'the Roaring Twenties'.

After marrying and starting a family, life slowed down and Gordon entered the motor trade when he bought and ran a garage on the Fulham side of Putney Bridge. However, war intervened and the garage was requisitioned. He spent the rest of the war working for General Motors at Feltham. After the war he went back to his cars, finally specialising in MGs at his garage in Mitcham, Surrey.

There were many strands to his life, a family man, a businessman and a gardening man who retained an abiding enthusiasm for motorcycle racing. After the war he became involved in the revival of Bemsee, the British Motor Cycle Racing Club. He was a director for many years and in 1993 was elected President, and then in 1999 made President for Life. As ever, he was a great participator, and as recently as September 2003 attended a meeting at Brands Hatch.

He died on 2nd January 2004, three days after his hundredth birthday, peacefully at home with his family.