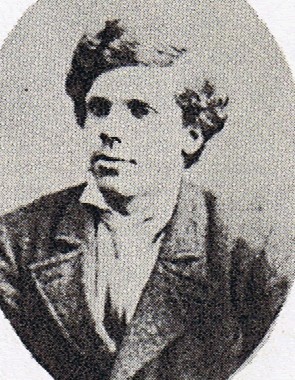 "C C", as he was known throughout his life, was the third son of Rev. John Farr and Emily Caroline Cobbold. The Farr family had lived at North Cove Hall for eleven generations and Emily's father was Robert Knipe Cobbold a brewer at Eye. Born 29th May 1851 in Suffolk, CC was a restless fairhaired child with a strong predeliction for risky exploration who ran, jumped and climbed to adolescence via Haileybury School.

He arrived in Ontario in 1871 enduring a tough few years before joining the Hudson Bay Company in 1874 to become a depot manager. By 1880 he was married and had produced a daughter, his only child. His first land purchase was made at Humphrey's Depot in 1885 and a further twelve hundred acres were added (at 50 cents an acre) thereafter. When the Post Office came in 1890 Haileybury, Ontario was on the map. The mining boom arrived with the railway in 1903 and Haileybury was incorporated and officially named after CC's school. The new town also adopted the school's motto "Sursum Corda" "Be of Good Courage". Little did the Founder know how important courage would turn out to be.

Ontario law did not permit the sale of liquor within 5 miles of working mines. Conveniently Haileybury was half a mile over the limit. That's where the mining companies wanted their offices and that's where the hotels and stores were built. Expansion was underway but sadly, the business part of the town was substantially destroyed by fire in 1906; but by the following year the population was over 4000, the property assessment topped $2 million and four storey buildings were rising from the ashes to accommodate the officials, the lawyers and the bankers.

CC was influential during these developments through public office and his newspaper, The Haileyburian which left it's readers in no doubt as to which projects were favoured. For recreation CC enjoyed his motorboat the Jinnie M, often accompanied by his faithful four legged companion O'Dawg. By 1912 Haileybury was the judicial seat and CC had built his 'stately' home on West Road overlooking the lake. Two years later after a short illness he died there on November 25th. 1914. It was said at the time "In a way, part of the town died with him"


Note: Paul Alexander Cobbold (1862-1922) CC's cousin went out to Haileybury and became the Divisional Court Clerk but died with his wife and his wife's uncle in the great fire of 1922 which destroyed 90% of the town.