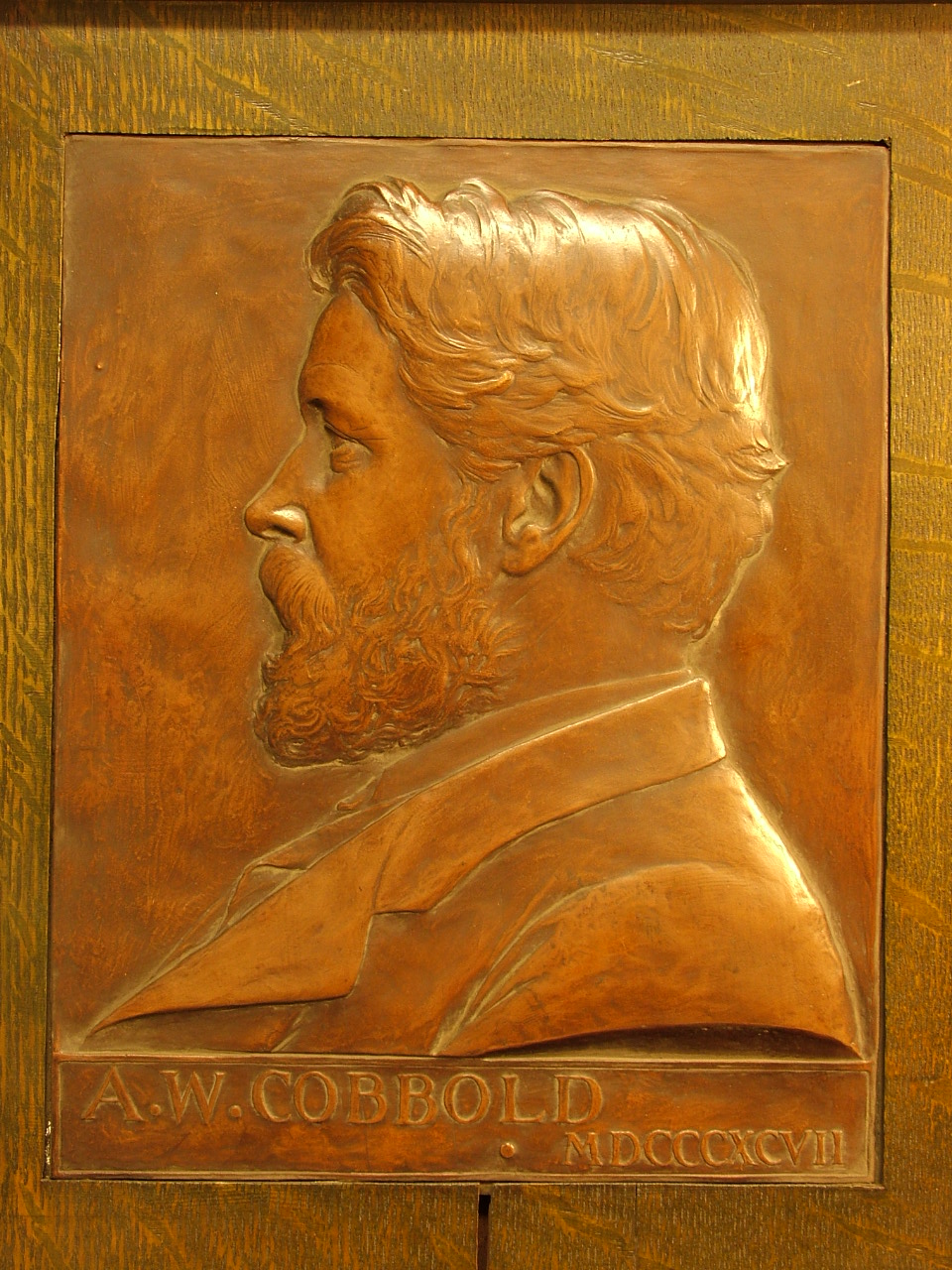 The picture of A W Cobbold is used with permission of the Curator, Worcester City Museum and Art Gallery who own the copyright, for which permission the Trust is very grateful.

Arthur was educated from 1861 to 1865 at Dedham Grammar School and at Felsted from 1866 to 1869. In 1870 he was apprenticed at ER & F Turner's iron works in Ipswich moving into the drawing office there in 1875. There followed a sudden change of direction He sailed for Colombo, Ceylon on the Viceroy on 26th of February 1876 and from March he was Superintendent of Coffee estates overseeing road making, draining and repairs to machinery in addition to normal estate works. November 1878 saw his retun to England made necessary by bad health. On return he became Chief Assistant to a Mr White on main drainage works at Oxford. Come the 20th September 1880 he is appointed as Foreman in the Operative Department at the Royal Mint on a salary of £150 per annum rising by £5 per annum up to £200. On this basis his earnings should have reached £200 by 1890. In reality we find that he only achieved a salary of £200 per annum from 1st April 1895 this time increasing by £7-10-00 per annum up to £250.

Earnings were important because in 1891 he had married Kate Elizabeth Mills whose father, a wool merchant had already died. The 1891 census, taken in April, just a couple of months after their marriage has the newly-weds living with his twin brother, Alfred in St. Helens, Ipswich. It's not known whether this was a temporary arrangement but Arthur is shown as a Mechanical Engineer on the census form which suggests that he was already studying for a qualification. On 23rd June 1898 he was promoted to Assistant Superintendent, having charge of the two melting houses and the machining of the Mint, on a salary of £310 per annum rising to £400 by £15 increments. His associate membership of the Institute of Mechanical Engineers was granted on 14th September that year. About this time, maybe a year or two previously Arthur commissioned a Portrait Plaque of himself by the highly respected Royal Mint engraver, George William DeSaulles (1862-1903), who worked with Arthur at the Royal Mint on Tower Hill in London. George was an important employee, on the cusp of a great career when he died aged only 41 in 1903. The Mint struggled to find a suitable successor.

The plaque, a skilfully executed work in low relief, thought to be the first in a series of five by DeSaulles of his senior Mint colleagues, was exhibited at the Royal Academy in 1897 and at the Royal Birmingham Society of Artists in 1903.

The 1911 census tells us that Arthur, then aged 59 and described as a retired Civil Servant was living at 2D Morgan Mansions, Holloway Road, Islington, North London with his second wife, Edith Bates and her (their?) son Herbert Kenneth Bates aged 7 months. The presumption is that he and Kate were divorced as she was still living when Arthur died on 22nd April 1929 at which time he was living at Felde Cottage, The Glade, Hollinbury St. Mary, Surrey. His will was proved by Mildred Swannell, a spinster about whom we know nothing.
At school Arthur was known as 'Clean Cobbold' to differentiate hom from his twin who acquired the name 'Dirty Cobbold' from trapping and skinning moles, rats and mice. Within the family Arthur is remembered as a big cuddly teddy bear of a man with a long white beard who smoked incessantly and became known to his nieces and nephews as Uncle Baccy.

The Trust thanks Steve Ingham, author and private researcher, for much of the above biographical information. May 2018, and January 2021.