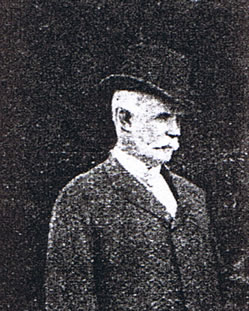 The death occurred in Melbourne recently of Mr William Cain in his eighty-fourth year. He was born at Rushen Abbey, Isle of Man, in 1831, and after service with the Admiralty Survey Department in England, came to Australia, arriving in Melbourne in the ship "Anna" in July 1852. He adopted his father's career of harbour and railway engineer, building the harbour at The Bluff, New Zealand, and various railway lines in New South Wales and Victoria. Later on he became interested in Coan Downs Station in the Hillston district of New South Wales, and was for many years a director of Goldsbrough, Mort and Co. Limited in Melbourne, for some time acting as chairman.
He purchased Madowla Park Estate, near Echuca, Victoria from the Executors. of the late M. O'Shanassy, and during the last few years of his life spent the winter months there. He was interested in Queensland with his brother-in-law Mr Francis Cobbold of Langlo, Listowel, and Mitchell Downs- chiefly in Inverleigh, in the Gulf country, and Hughenden Station. His pastoral interests, however, he transferred several years ago to his three sons.
The late Mr Cain visited England on several occasions, and when there in 1877 married Miss Jane Cobbold, niece of Mr J C Cobbold, DL, MP, and High Steward for Ipswich, of Holy Wells, Suffolk. Mr Cain was Mayor of Melbourne in 1886-7, and member of the Legislative Council for the province of Melbourne from 1903 to 1911. His wife survives him.

During the burial service in St Paul's Cathedral, Archbishop Clarke, in an address said:

Once more we gather at the last solemn service following upon the death of a member of our Cathedral Chapter. Mr Cain has closed his long life's work with honour and great respect. His work for the Church has been faithfully rendered through many years; and in the parishes with which he has been connected, in the synod of which he was so long a member, on the council of the diocese, where his services were so highly valued; and, most of all, in his labours in connection with the building of this Cathedral, he has left behind him a long and honoured record of church work.
Two objects held a foremost place in his thoughts, (1) The Cathedral; (2) the Melbourne Grammar School. During the building of the Cathedral, Mr Cain gave unstinted time and personal service to its erection. His valuable professional knowledge was given for some years without payment or reward. To no one is this church more indebted than to Mr Cain for this long - continued and valuable help. In recent years he has given unceasing labours and effort to the welfare of the Cathedral, so that no one has held more worthily the office of lay canon. As a member of the Melbourne Grammar School Council, Mr Cain has held a foremost place. His love for thr school became an abiding sentiment of his life, and his memory will be cherished for all time as one of its best friends. To this record of Mr Cain's public services, I wish to add my personal affection for one whose generosity and courtesy were unfailing. On many occasions he has enabled me to render assistance where it was needed by means of gifts privately bestowed. For all these reasons I offer now the Church's tribute of respect for a good man, who till the end of his life worked amid much physical weakness to carry out the duties of his several offices. We shall number Mr Cain amongst the Church's benefactors, who throughout a long life maintained his faith in Christ, and grew in goodness and in reverence. To his widow and children I tender our sympathy in their loss and our expression of a sense of loss which has fallen upon the whole church.

He was buried on 31st October 1914 at Boroondara Cemetery, Kew following the service at St Paul's Cathedral.