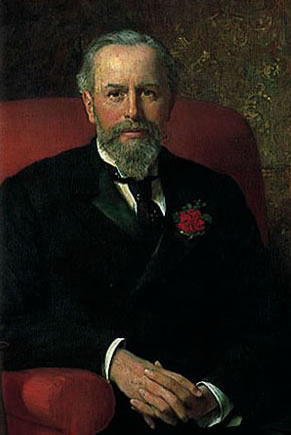 Born in Ipswich, youngest son of John Chevallier (1797-1882) and his wife Lucy Patteson (1800-1879) Felix Thornley was as bright as a button. He was a King's Scholar at Eton, matriculated at Trinity College, Oxford, took a BA and MA at King's College, Cambridge where he was sometime second bursar and a Senior Fellow, a position he retained for life. He was called to the Bar at Lincoln's Inn but never practised.

He would probably have preferred to stay in Cambridge but returned to Suffolk to take up his interest in Cobbold & Co., Brewers and Merchants in 1876 following the untimely death of his elder brother John Patteson. His father was still alive but anxious for his sons to take over. Another elder brother, Nathaniel Fromanteel (1839-1886) died in his forties and Felix Thornley assumed his interests in Bacon, Cobbold & Co. Bankers.

He became a wealthy man but in common with his forbears he was also very generous and being unmarried he did not have to consider the next generation. Inter alia he donated to Ipswich land for St. Clement's Baths; a clock and carillon for St. Clement's Church and 45 acres of Gippeswyk Park plus cash for fencing. Although coming from a staunchly Conservative family (his father and 2 brothers had been Conservative Members) he showed his radical leanings by being elected Liberal MP for Stowmarket in 1885 and Ipswich in 1906. He had already been Mayor of Ipswich 1897.

In addition to his businesses he was a farmer with land in Felixstowe, Hadleigh and Sproughton. He lived a while at Holywells but re-built and hugely extended Felixstowe Cottage with the help of local architect Thomas Cotman.

In 1895 Christchurch Mansion came on the market with a proposal for demolition and replacement with housing. Felix offered to buy the mansion and give it to Ipswich if the Borough could find the relatively modest £15,000 being asked for the park. The deal was done and he was given the honour of the Mayoral appointment for Queen Victoria's Jubilee year.
Felix, still an active man, died of kidney failure in London in 1909. His will provided £20,000 for the purchase and maintenance of Works of Art for Christchurch Mansion which he had requested should become the borough's art gallery.

All his agricultural land was left to the county in trust and he financed the reconstruction of a court at King's, Cambridge. These gifts survive to this day and Christchurch is a fine memorial to a generous man. Hewas a member of the Ipswich Fine art Club in 1909.

Note: The Felix Thornley Cobbold Agricultural Trust is a charity which now owns much of his original land with the purpose of promoting agricultural education and good farming practice. Otley College stands on such land.