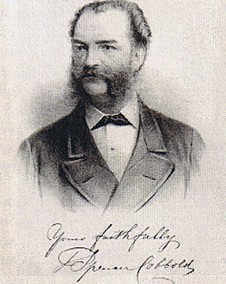 Thomas Spencer was born in Ipswich in May 1828, 3rd. son of Rev. Richard Cobbold (of Margaret Catchpole fame) and Mary Anne Waller, allegedly descended from Edmond Waller the poet.

He was schooled at Charterhouse and apprenticed at 16 to J.G.Crosse, a surgeon in Norwich who helped develop Thomas Spencer's bent towards Natural History and particularly his interest in comparative anatomy as a result of which he became a skilled dissector. In 1851 he graduated MD gold medalist from Edinburgh University which was the start of a career in research rather than practice, but of the greatest diversity.

Later, he was vice-president of the University Club; vice-president of the Birmingham Natural History & Microscopial Society; corresponding member of the Acadamy of Science at Philadelphia and the Royal Agricultural Acadamy in Turin. He became Professor of Botany and Helminthology at the Royal Vetinery College and Emeritus Swiney Professor of Geology at the British Museum and was for some time examiner in comparative anatomy, zoology and botany at St.Mary's Hospital and lecturer in the same three disciplines at the Middlesex.

He never lost his loyalty to his alma mater becoming the curator of the Anatomical Museum at Edinburgh and senior president and vice-president of the Royal Medical Society and the Physiological Society respectively. As well as being a clear if dogmatic lecturer and a much enjoyed after dinner singer he was the author of numerous works on Helminthology and in an unexpected change of direction he practiced in Wimpole St. and later in Harley St. for ten years.

He died at home at the relatively early age of 57 from heart desease in part occasioned by over work.

Note: The Cobbold FHT has copies of many of his works, including his contribution to The Museum of Natural History (1860)