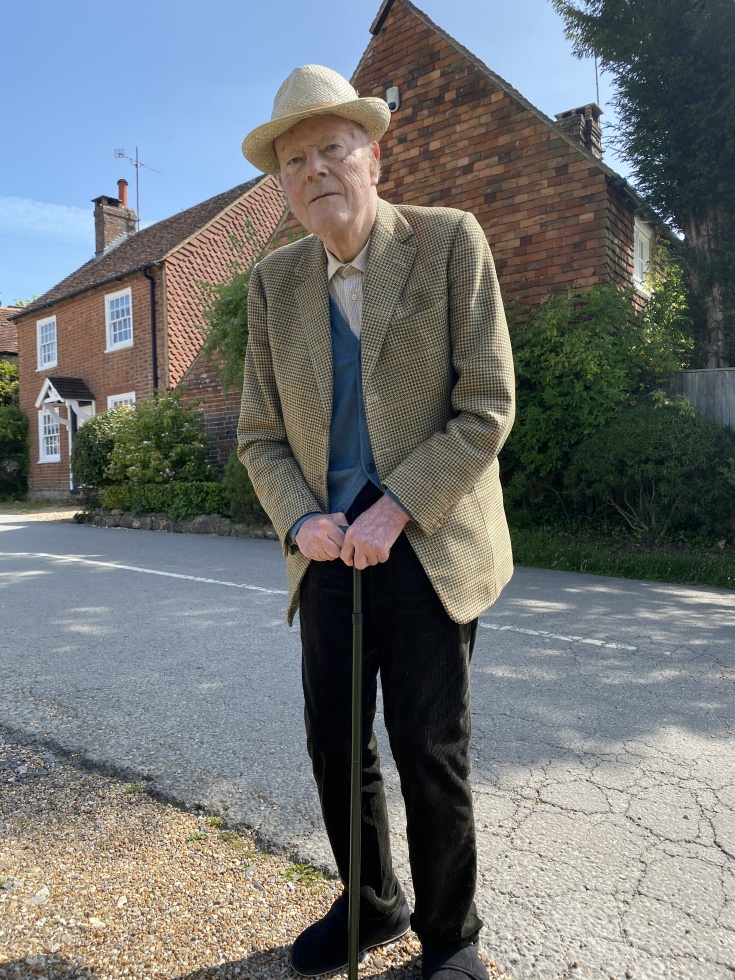 Jeremy Smith, who died on Saturday 13th March, was a member of the Smith banking family. They have numerous connections with Sussex as historically, amongst others, they owned the rotten borough of Midhurst which returned two members of parliament before the Great Reform Act of 1832. Various members of the family made Sussex their home from John Smith (who owned the Dale Park Estate), Oswald Augustus Smith (Hammerwood Estate) and Jeremy’s great grandfather, Eric Carrington Smith, who bought the Ashfold Estate in about 1870.

It was at Ashfold (now demolished), near Handcross, that Jeremy spent his childhood with his three siblings. His father, Capt Eric Smith MC, was chairman of The National Provincial Bank and of Rolls Royce. Ashfold was a very large house and during the war the family lived on the first floor, the ground floor was a hospital and the second floor housed nurses and refugees. Jeremy was an enthusiastic schoolboy at Eton, the sixth generation of his family to be sent there. He became captain of his house, a member of Pop (school prefects) and rowed in the Eton VIII.

His national service was spent with the 9th Lancers, his father’s old regiment, in Scotland. He always said that it was very dull with too little to do. He then went to New College, Oxford, and continued his rowing for a successful New College VIII and rowing in the 1951 boat race for Oxford when his crew sank. Sadly, his father died young and Jeremy left Oxford to work in a family run bank, Smith St Aubyn.

He worked his way up eventually becoming chairman in 1973 until the business was taken over in 1986, when he retired from the City. He was a trustee of Henry Smith’s Charity from 1971 and, after his retirement, worked for St John Ambulance in Sussex too. He was High Sheriff of West Sussex in 1992 and a Deputy Lieutenant.

In 1953 he married Rona, younger daughter of Sir Walter Burrell Bt of Knepp Castle, and after a brief period in London they moved to Newhouse Farm on the Paddockhurst Estate. In 1963 he bought an old rectory, Balcombe House, from his wife’s sister, Pen Greenwood (who had inherited the Balcombe Estate). It was here that he lived with his wife and four children until he downsized and moved to Slaugham, where he died peacefully in his bed on 13th March.

In the early days of his marriage he became a member of the Crawley & Horsham hunt and a keen point-to-pointer. He had many successes in the early 1960’s on a series of horses including ‘Another Melody’, ‘Father Christmas’ and ‘David Copperfield’. He was completely fearless both on the hunting field and point-to-pointing and as a result had many a fall, but it didn’t seem to worry him. He adored hunting and kept horses in Leicestershire as well as Sussex, but his funniest stories were always about his times hunting in Ireland on hirelings.

He was also a keen game shot and an excellent deer stalker, keeping fit on the Scottish hills well into his 70’s. In later years he took to croquet and was active at his club in Preston Park until recently.
His wife, Rona, died in 2004 and in 2008 he married Lady Gillian Kertesz, daughter of 6th Marquess of Exeter, who survives him along with the three eldest children of his first marriage, his twelve grandchildren and sixteen great grandchildren. He died with 31 living descendants. However, his great great grandmother Henrietta Smith (1805-1891) is recorded as leaving 111 direct surviving descendants on her memorial in Sanderstead church!