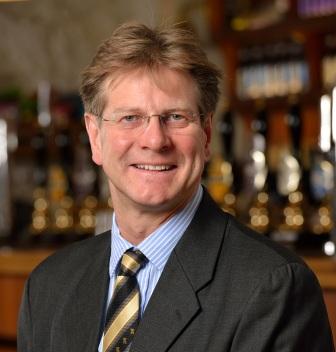 Simon James Staughton, always known as James, (born 1959) #1358 on the web family tree has survived a climactic final year prior to his retirement as CEO of St. Austell Brewery in January this year. His tenure at the famous West Country family brewery founded in 1851 by his great, great grandfather, Walter Hicks (1829-1916) #14335 on the tree, started as an apprentice in 1980 at the age of 21. Moving around the brewery and doing as many different jobs as possible, including brewing at 5am, he became the Wines and Spirits director in 1990 and was appointed CEO in 2000.

Since he joined the Board the estate and the employee count has grown hugely and the turnover rose from £10 million to just under £200 million in the last financial year. For British Airways St. Austell’s ‘Tribute’, an amber-hued Cornish Pale Ale is its beer of choice. James has often expressed his pride in his team which has won some 290 awards. Most of this growth was organic, with expansion up country from its loyal Cornish base and into Europe and beyond, but it did include the acquisition of Bath Ales in July 2016 with its own brewery, some strong local brands and 11 pubs. As James said at the time “Bath Ales is a company I have admired and this acquisition provides the coming together of two like-minded businesses.”

You might think that with this much business responsibility he would not have time for anything else but you would be utterly wrong. He has been active in promoting Cornish tourism and for six years was a director of the Cornwall Development Company; he is currently Chairman of the St. Austell Bay Economic Forum which is busily pursuing 11 major development projects in the bay area.

During his final year James received two well-earned lifetime achievement awards, one from the Western Morning News at the end of 2019 and the second from The Publican in early 2020 to widespread acclaim. Its citation read “As the fifth generation of a family business, at a time when traditional brewers faced some of their toughest challenges, Staughton has embodied a spirit that embraces change while holding true to original values.” He has retired to become President of the company.

In the New Year Honours James was created OBE for services to brewing and to Cornwall and was warmly congratulated in his role as Renter Warden of The Worshipful Company of Brewers, of which he will become Master in 2022. Back in 2012 he was appointed a Deputy Lieutenant for Cornwall by the Lord-Lieutenant for Cornwall Col. Edward Bolitho (born 1955) #8963 on the family tree. Our congratulations on a distinguished career are not out of place.