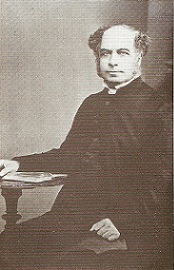 William Corbet Le Breton had the reputation of being a womaniser. He was baptised in St Helier on 17 March 1815. Educated at Winchester, he was a fag to Lord Selbourne, who once beat him severely on the head with a frying pan for burning his bacon. He matriculated at Pembroke College, Oxford in 1830; BA in 1835; MA in 1837; Fellow of Exeter 1837-42. He was ordained deacon in 1839 and priest in 1840. He was curate of St Olave's, Southwark. After having spent several years in the ministry in London, was named Rector of St Saviour in December 1849 and installed on 17th January 1850. He had been named Dean of Jersey by Patent on 11 January and was sworn in as such the day before his installation. In 1875 he became Rector of St Helier replacing Rev Philippe Filleul.

Dean Le Breton was an erudite man of strong classical culture. He married and had seven children but his notorious womanising eventually led to his leaving Jersey and ending his days in the poor London parish of Kennington.