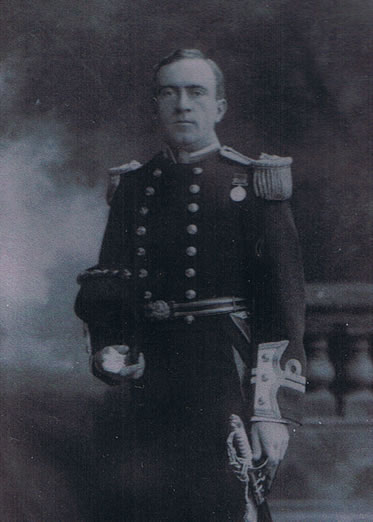 Captain Lord Broome. RN.
The death of Captain Viscount Broome RN retired, in his 50th year was briefly announced in The Times of Thursday.
Henry Franklin Chevallier, Viscount Broome was the only son of the present Earl Kitchener, and a nephew of the first Earl. His mother was Eleanor Fanny, only child of Lieutenant Colonel Franklin Lushington CB. Born on October 17th 1878 he entered the Britannia as a naval cadet in January 1893 and went to sea two years later in the Cruiser Canada on the America and West Indies Station, from which he transferred to the Crescent, flagship of Vice-Admiral Erskine on the same station. He was promoted to Lieutenant in September 1899, and after a commission in the battleship Goliath in China, in which he served during the Boxer operations, he qualified in gunnery duties in 1904.
In July, 1910 he became first and gunnery lieutenant of the battleship Russell in the Mediterranean, and was promoted to commander a year later, in the Coronation list. He qualified as an Interpreter in German and Italian, and in 1912-1913 was employed in the Naval Intelligence Department.
Resuming duty afloat as commander of the battleship Ajax, he served in that vessel during the first part of the War, in the Grand Fleet. In May, 1916, he took command of the monitor Raglan, and was present in her when the German cruisers Goeben and Breslau made a sortie from the Dardanelles on January 20th 1918. The Raglan was one of two monitors north east of Imbros which were caught at anchor, hit by the first two German salvos, and sunk within a few minutes, with heavy loss of life. On their way back the Breslau struck a mine and was sunk, and the Goeben, which also sustained damage from mines and aircraft, had to be beached off Nagara Point, where she lay for about a week. Commander Viscount Broome, as he had become on the death of Lord Kitchener in the Hampshire in June 1916, was appointed in March 1918 to the aircraft carrier Furious. He was mentioned in despatches in July 1917 and February 1919, and was appointed a member of the 4th Class of the Egyptian Order of the Nile.
He retired at his own request on August 17th 1920, and was promoted to the rank of captain, retired, on October 17th 1923. Lord Broome married in 1916 Adela Mary Evelyn, eldest daughter of Mr J H Monins, Ringwould House, Dover, and had two sons and one daughter. The elder son, Henry Herbert Kitchener, born in 1919 now becomes heir to his grandfather.