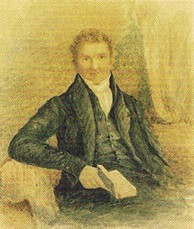 Early education was under Charles Blomfield followed by seven years at King Edward VI Grammar School. He arrived at Gonville and Caius College, Cambridge in 1814, won a scholarship and graduated BA in 1820, the year in which he was ordained. His Tutor at Caius was Dr.Benedict Chapman who he claims was very influential in his life and went on to become Master of Caius 1839-1852.

Richard was curate to his uncle the Rev.Thomas Cobbold at Woolpit and St.Mary-le-Tower, Ipswich. In 1822 he married Mary Anne Waller and in 1824 his father bought them the living at Wortham. He built a new rectory and moved there in 1828, albeit very reluctantly because it meant giving up the social and family life he enjoyed so much in Ipswich.

The first two children Richard Wilkie Waller and Edward Augustus were both born before their parents left Ipswich and both were ordained. The third child Thomas Spencer was born at Wortham the year they arrived. 'Valentine Verses' was published in 1827 to a critical reception but in 'The History of Margaret Catchpole' he had a best seller. This success was never repeated but not for want of trying. He was devoted to his parishioners and kept a detailed and illustrated account of their lives which came to some prominence in 1977 with Ronald Fletcher's 'Biography of a Victorian Village' which was televised the next year.

Richard was Rural Dean of Hartismere 1844-69 and throughout his life he was a prolific writer and much enjoyed the pursuits of an English country gentleman. However his life was not without anxiety for in 1862 he decided to sell the living at Wortham to Kings College, Cambridge to help provide for two of his childrens' marriages. He and his wife both suffered ill health for most of 1876. She died on 26th December aged 75 but Richard was not well enough to be told. He died just a few days later on 5th January 1877. They lie in the churchyard at Wortham.

Note: The Cobbold FHT has copies of many of Richard Cobbold's works, some carrying his signature and also a copy of the 1978 television programme.